Once upon a time, I read the newspaper a lot more than I do now. I read it online, because it was free and convenient. What I mostly read was the New York Times. I still read the New York Times, at least selectively – the articles I’m really interested in. But I find that what I read, more and more often, are my friends’ blogs. When I’m on my computer, to the left of my screen I have a list of my favorite blogs, and when I want to know what’s going on, I check them. Or I check facebook. Or twitter. It’s almost as though I’ve constructed a newspaper of my own, the sort of newspaper that used to exist in a small town, filled with local events and personalities. I live in an online community, and I check the news for that community. I’m still connected to the larger world, but in addition to hearing about what’s happening in that world, I’m hearing who finished a story, who sold one, who has a novel deal. I like that a lot. It makes me feel as though I actually were living in a small town, where the local events matter. It makes me feel comfortable. In a way, it makes the larger world a bit less overwhelming.

I write all this to explain why I was reading a blog post by Neil Gaiman called Now We are TEN, about the fact that his blog is ten years old. (Only ten? Goodness. I think of it as having been around forever. In a way, my own blog has been around for almost as long. I uploaded my first website, and a fairly rudimentary website it was, back in 2001, when I was at the Clarion Writing Workshop. I still remember the first few emails I received – my first contact with readers! Including a soldier who was overseas, and who liked what I had uploaded. Shortly after that I started an online journal – back then, all hand coded in HTML, with no commenting, no RSS feed. But even then, a number of people would come and visit regularly.

What I noticed in particular about Neil Gaiman’s post is that he included a picture of himself in pajamas, before he had showered and shaved.

And I thought, what an interesting choice. Why would he do that? Because we’re all vain creatures, we all want to present ourselves to the world in a certain way. And there are plenty of pictures of him online that present him as a sort of literary rock star: the dark, brooding, handsome type. It’s fun to have pictures like that taken of you. It’s fun to play with your image, especially to present yourself as the glamorous author. And if you can, why not? We should be able to play with our images, to invent and reinvent ourselves.

I think the pajama picture comes from a different impulse, an impulse to be real. Because there is a point at which, as a writer, you become not quite real to people. We see this in the dead and famous: we know that Virginia Woolf was real, an actual person. And yet she is not real to us anymore, she is Woolf. They are Hemingway and Faulkner and Joyce, not people who ate breakfast and couldn’t get songs out of their heads and had colds. That’s all right, with the dead.

But at some point, living writers become unreal as well. To me, the writers I read as a teenager, and who affected me at that time in my life, will always be more than themselves, slightly mythological. I will never be able to look at Tanith Lee or Ursula Le Guin or Terri Windling or Patricia McKillip or Robin McKinley or Ellen Datlow or Jane Yolen as just people. Even though I’ve actually met some of them, and know a few of them well. They became important figures for me at a particular time in my life, and they still retain that magical aura.

Once, I almost met Ursula Le Guin. It was at Wiscon. I was standing in the women’s bathroom, washing my hands in the sink, when I suddenly became aware that at the sink next to me was Ursula Le Guin. Did I introduce myself, say “I grew up on your books, they made me what I am? They made me a writer?” Of course not. Can you imagine Ursula Le Guin remembering you as the person who accosted her in the women’s bathroom at Wiscon? And so I have never met her. Friends of mine know her well and have studied with her, and when they talk about her, it’s as though they’re talking about a real person. And intellectually, I recognize that she is. But my instincts tell me otherwise.

And I’ve noticed, and this is in the smallest possible way, that sometimes, when I meet someone who has read my stories but does not know me personally, I’m not entirely real either. I still remember the strangeness, one day, of being in the Boston University Barnes and Noble and having someone say, “Excuse me, are you Theodora Goss?” Someone who knew me only from my writing, who had seen my picture online. (This is the only time such a thing has happened to me, and I don’t expect it to happen again anytime soon.)  And it’s still strange to hear myself referred to, not as Dora, but as Goss.

So I think we have an impulse, as writers, to insist on our own reality, to resist the mythologizing that does happen. We do that, in this technological age, by reaching out, by writing blogs, putting our selves (as real as we can make them) out there. A writer like Neil Gaiman gets mythologized more than most. I think the pajama picture represents an impulse toward the real, toward that sort of connection.

When I saw it, I thought, all right. I’m going to take a picture of myself, in my pajamas, before I’ve showered. The way I read emails first thing in the morning. Here it is: 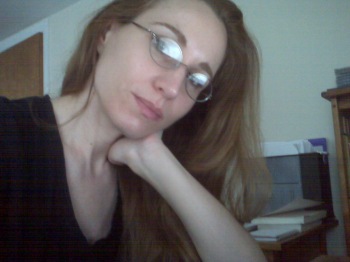 For vanity’s sake, I’m also going to include a picture of me several hours later, looking considerably more composed, as he does. Here I am answering emails: 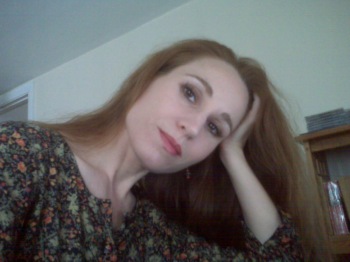 It’s a strange thing, this being not quite real.  I think all writers have to deal with it. I see my friends dealing with it, since many of them are in the process of becoming known, becoming personalities. It’s wonderful in a way, because it means that people are thinking of you as a writer, appreciating your work. But it’s also a thing to manage, a thing that can make you feel quite strange about yourself, as though you’re not really you. Which you are – at least first thing in the morning, in pajamas.

2 Responses to Being Real