February is going to be a difficult month.

I just want to give you fair warning, in case I complain about it. Because I have so much to do, and I’m tired already even though it’s only the second day. But all the things I have to do are good things to get done, so there’s that. They’re all projects I’ve taken on because I want to do them.

And there have been some wonderful things happening already. For example:

1. My poem “Ravens” has been nominated for a Rhysling award. It will be appearing in the Rhysling Anthology.

2. My stories “The Mad Scientist’s Daughter” and “Fair Ladies” are on the 2010 Locus Recommended Reading List. Those are the only stories of mine published in 2010, so to have them both listed was especially wonderful.

3. I will be at Boskone from the 18th to the 20th. I’ve received my preliminary schedule, which may change. It looks as though I’ll be on six panels and doing a reading. I’ll post my final schedule as soon as I get it!

4. My first Folkroots column is coming out this month and will be available soon, both in Realms of Fantasy and online. I’ll let you know as soon as it’s available!

5. I just received copies of People of the Book, the wonderful anthology of Jewish science fiction and fantasy edited by Rachel Swirsky and Sean Wallace. My story “The Wings of Meister Wilhelm” is reprinted in it. Look, isn’t it gorgeous? 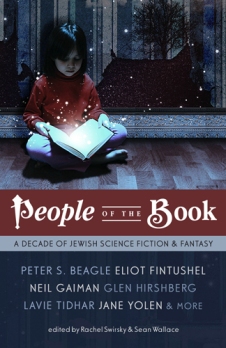 So there are wonderful things happening. But I’m tired and I have so much to do and there’s just so much snow on the ground, and there’s still an awful lot of winter before spring comes.

Still, one thing I’ve learned as I’ve gotten older is that time passes, inevitably. You can’t stop it from passing. What you can do is decide what you want to do with that time. And everything I’m doing matters, it’s all important, it’s all going to become a whole, something larger than itself.

This is a post about Imbolc, isn’t it? About the old festival, also called St. Brigid’s Day, that marked the beginning of spring, when you don’t actually believe that spring is coming because for goodness sake, look at all that snow! And you feel tired and restless at the same time. I didn’t realize that when I began writing it. But it’s about that specific time of the year when something begins to rise in you, like sap.

You’re still in the darkness of winter. Yesterday, I was looking at myself in the mirror on top of my dresser, and I saw myself in that darkness, so I decided to take a picture of it: 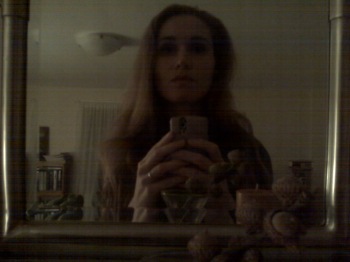 The branch of acorns at the bottom of the picture: I picked that up last fall. It’s in a small vase on my dresser, with a candle and a bowl of shells and a talisman with a swan on it. It reminds me that this is all a cycle. And so while I stand in the darkness, the light is coming, and there are already buds on the trees, and under the ground the bulbs are beginning to sprout.

There’s so much winter yet. But the light is returning.