Writing Exercise: Choose an image by a surrealist painter and write a story about it.

The Sacred Wood by Arnold Böcklin:

In the grove by the temple, we knelt before the living flame. It spoke to us, of course, and told us what we had to do.

We were so out of time, out of our own time I mean. Me and Emma and Matilda. What was it, something something B.C.? In a civilization that history had forgotten. The priestesses stood behind us, waiting. They were used to this, they always talked to fire. And water, and tree, and stone. It was we, in our own age, who had forgotten how. Or perhaps our fires and waters and trees and stones had forgotten how to speak.

It’s funny, if you think about it. Stuck in something something B.C. among the Ilurians, kneeling before a living flame who tells you to “Find the gray woman, the spinner of webs, the sayer of spells.”

“She’s everywhere,” I said. “If there’s a moment in history when she doesn’t exist, it’s way before this one.”

It told us to look on the mountaintop, hissing as flames do. Well, that was where we would look, then.

And assuming we found Miss Gray, what then? Would she know how we were going to find Sitgreaves? Because you see, and I haven’t told you this – somehow or other Sitgreaves had taken Mouse. And Miss Gray, our own Miss Gray, had said, “He’s taken her somewhere in time, girls. You’ll have to go back or forward, following his trail.”

“How can we go forward in time?” Emma had asked. And Miss Gray had frowned, because she had explained about traveling in time the week before in Elementary Time Travel, and she never explained anything twice.

She had sent us back, the way she did everything: shifting space and time with the help of metaphor. Meaning, in this case, an hourglass. “You understand, of course, that the hourglass does nothing,” she told us, always the teacher. “It’s the mind that shifts time. The metaphor merely gives it something to focus on.”

And there we were, greeting the Ilurians and explaining to them that we were from Miss Lavender’s School, and had they seen a girl with white hair?

The high priestess told us that, although she had not seen Mouse, any friend of Mrs. Moth’s was a friend of hers, although she called Mrs. Moth by another name. And she invited us to meet the oracle. The living flame.

And now, that living flame was telling us to find Miss Gray, the gray woman.

“All right,” said Matilda. “On to the mountain. I’m glad we at least got lunch.”

The Isle of the Dead by Arnold Böcklin: 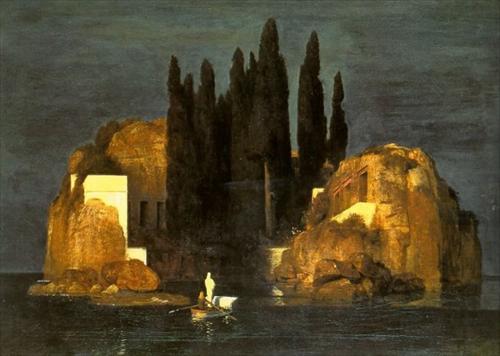 He had died again. He had died nine times, at least I think the number was nine. Honestly, I had lost count.

Emma and I rowed him to the Isle of the Dead. Well, I did most of the rowing. Emma stood up in the boat, looking all dramatic and solemn.

“He’s going to come back again,” I told her. “He always does. He just appears from another point in history.”

“I know,” she said. “But isn’t it romantic? I’ve never been to a funeral before.”

There we were, in something something B.C., and she wanted to stand in a boat and look romantic. Whatever.

I thought about the events of the last few weeks. Finding Miss Gray, or the gray woman as she was known by the Ilurians and random talking flames. She had looked almost exactly like she did in our own time, except that she had been wearing a linen tunic and her hair had been coiled and draped in a series of braids. The first thing she said was, “Emma, stand up straight. Matilda, you have a stain on your school uniform. And Thea, what in the world are you girls doing here anyway?”

We had told her about Sitgreaves taking Mouse. And she had told us where to find them. When we got there, Sitgreaves was already gone, and Mouse had been under a spell. She had been asleep. And Sitgreaves had gotten what he wanted, the key she wore around her neck.

It took a while to wake her, and that was when Merlin showed up. He wasn’t concerned about Mouse, of course not. He just wanted the key.

“What’s so special about it?” I asked him.

“It opens a door to the Other Country,” he said.

“Any door,” he said. “You put the key in the lock, and it becomes a door to the Other Country.”

Sitgreaves had been banned from the Other Country. But that key would let him in again.

“She made the key. She gave it the properties that allow it to open any door to the Other Country. She won’t work against her own magic.”

“Whatever,” I said. “It’s probably some stupid working out of the pattern.”

“I need to find that key,” said Merlin. And he vanished in a plume of smoke. Typical.

We woke Mouse, and I won’t go into the details of our adventures. Just as we thought they were finally over, we found Merlin’s body. He had fought Sitgreaves and lost, which meant that Sitgreaves still had the key.

“I’m sending you back,” said Miss Gray, the gray woman, the spinner of webs, the sayer of spells. “By now, he’s gone wherever he’s going to go. The next battle will be fought in the Other Country itself. Tell Mrs. Moth and Miss Lavender what happened here. And tell them to get ready.”

“What about Merlin?” asked Emma. She was always the romantic, the tender one. “Shouldn’t we, I don’t know, hold a funeral for him or something?”

So we rowed him to the Isle of the Dead and left him there, with the shadows that live behind trees and beneath rocks. But we knew we would see him again, when we least expected it. We always do.