I recently noticed that two people had responded to blog posts of mine on their own blogs. I love it when that happens! The first was Hecate, who responded to my post “Courage” with her own post, “Who is Choosing to Lost the Fight?” In that post, she quoted from T. Thorn Coyle:

I think that’s such an important observation. And I think it’s sometimes true of me too, that when I lose, I’m choosing to do so. Sometimes it’s because I know in my heart that I’m not ready for that particular fight. If I won it, I wouldn’t be ready for the consequences of victory. Sometimes it’s just because I’m afraid that I’ll lose, and so I put in a half-hearted effort. Because if I didn’t really try that hard, it doesn’t matter as much that I lost.  But most of the time, I’m in whole-heartedly. And those are the times that if I win, I know I deserved to, and if I lose, I’m still proud of myself for having made the attempt.

If you want to win at things in general, or to succeed at things since winning is a strange word to use for most of the things we want to do, you have to be willing to lose as well. I think it’s when you’re not afraid of losing that you can put your whole heart into the fight in the first place.

“This reminded me of some very different experiments using software to create ‘beauty’ by combining facial characteristics from a number of photos. The result was an ‘average’ of the various faces. And experimenting with such composite photos, researchers find that the more averaging is done, the more ‘beautiful’ the results are for most people looking at the photos.

“This suggests (to me at least) that most of us have a hardwired ‘picture’ or icon in our minds that we compare to any given real face. The closer the face to that hardwired icon, the more beautiful is our perception of it.

“This is also how the old trick of taking pictures of women through gauze or lens smeared with Vasoline works; their features become less pronounced – averaged – and they appear more attractive. Likewise digital artists now arm themselves with plugins that add a little light scatter to photos, blurring things in a special way to create a ‘beauty shot.'”

While I think that’s generally true, that we do tend to have a hardwired picture in our brains – or perhaps a hardwired series of mathematical relationships – one thing strikes me about Duncan’s post and the research he cites.

The actual averaged faces I’ve seen have always struck me as somewhat bland. They are attractive rather than what I would call beautiful. In terms of the theory I set forth in my post, they have too much unity, not quite enough variety. They are not Julia Roberts, whose face has the general symmetry of the composite face but also something more, something unusual about it. I think it’s what Edgar Allan Poe called a “strangeness in the proportion” in “Ligeia.”

Although I do notice, as Duncan pointed out, that when I use a little light scatter on my photos, they generally look better.

I’m going to end by including something I think is beautiful: Madame X, by John Singer Sargent. 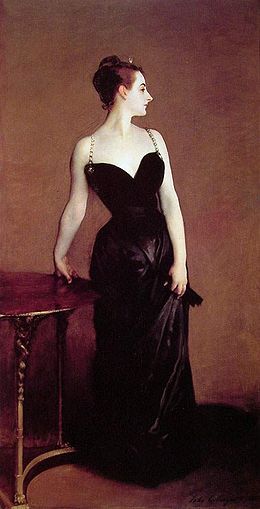 Notice the interplay of unity and variety. And notice the Hogarthian serpentine lines. Plus, I think she has a great nose!