A few days ago, I had a long conversation with a friend about beauty. After that conversation, I realized that I have two incompatible views of beauty. And I don’t know how to reconcile them.

The first view has to do with beauty in nature and art. It comes from two places. I took a class on eighteenth century aesthetic theory in which we talked about various definitions of the beautiful, and the one I found most convincing was a rather old one, and a fairly staid one actually. It was that beauty consists of variety in unity. That is, a variety of things (lines, shapes, colors) that nevertheless comes together as a unified whole. And the greatest beauty is the maximum amount of variety, still unified. I have a feeling that it comes from William Hogarth’s Analysis of Beauty, but I’m not sure; I’d have to read it again. Perhaps it’s my distillation of Hogarth and his “line of beauty” or serpentine line (the s-shaped double curve that he thought was the most beautiful shape).

And then I heard, on a television show, about a physicist named Richard Taylor who had analyzed Jackson Pollock’s paintings and found that they were fractals. That is, there was self-similarity in them: the same mathematical relationships exist in the painting as a whole and in parts of the painting. You can read an article on Pollock’s fractal patterns here: “Pollock’s Fractals.” A fractal demonstrates the same principle I found in Hogarth: variety within unity. If you look at fractal patterns like the leaves of a tree, they have a fundamental unity, but they also have an almost infinite variety. And we consider them beautiful.

If you read the article I linked to, you’ll find that Taylor conducted a series of experiments to determine which sorts of patterns human beings find most pleasing. He determined that what we find most pleasing are fractals, but more than that, fractals with a specific relationship: the ones closest to the fractal dimensions we see in nature.

I’m going to include three quotations from the article:

“Studies have found that people prefer patterns that are neither too regular, like the test bars on a television channel, nor too random, like a snowy screen. They prefer the subtle variations on a recurring theme in, say, a Beethoven concerto, to the monotony of repeated scales or the cacophony of someone pounding on a keyboard.”

“Artists, architects, writers, and musicians may instinctively appeal to their audiences by mimicking the fractal patterns found in nature.”

“In a famous 1950 documentary by Hans Namuth, one can see Pollock circling his canvases on the floor, dripping and flinging paint in motions that seem both haphazard and perfectly controlled. He wasn’t merely imitating nature, he was adopting its mechanism: chaos dynamics.”

So that’s my view of beauty in nature and art. I believe that beauty in the natural world and in an artistic work comes from variety within unity, and that a particular relationship between the two triggers something in us, a sense of recognition that makes us say, “Yes. That’s it.” I think my best stories have that, a particular relationship between variety and unity. It’s something I was not aware of when I started writing, but that I’m more aware of now. I want my stories to be like Pollock’s paintings: if you look at them closely, they should still be intricate. There should still be more to see, within a unified whole. And I believe we see beauty in that particular relationship because we’re wired to do so. We’ve been wired that way by millions of years of evolution within a fractal environment. We think art is beautiful when it most closely resembles nature, not by representing it but by operating according to the same mathematical principles.

But that view is completely at odds with my view of personal beauty. Do you remember Merlin, the television miniseries? It features Helena Bonham Carter as Morgan le Fay, who is initially disfigured but who is made beautiful by magic. At the end, after she has been defeated, she becomes disfigured again. Merlin tells her that her beauty was only an illusion. She looks up at him and says, “Beauty is always only an illusion.” That’s what I believe about personal beauty, that it is always constructed. Think of the different looks of Helena Bonham Carter herself, all the different ways she can appear. Sometimes beautiful, sometimes plain, sometimes grotesque.

I find it fascinating to look at the women who have to be beautiful because it’s a professional requirement: film actresses. When they start out, they are often not particularly beautiful. Think of Scarlet Johansson in Ghost World, and think of her now. She has been Hollywoodized. There is something Hollywood does to them. They lost some of their individuality. But they gain a sort of glow. They no longer look ordinary. They become luminescent. And then, when a film role requires, they can become quite ordinary again. Think of Kate Winslet as Iris Murdoch in Iris. And then, for appearing ordinary (which the film industry evidently sees as a significant feat), they often win Oscars.

In the course of this conversation, my friend commented on some pictures of me he had seen online, and I said, “You should see me with green goop on my face.” And then I said, “I should post a picture of that.” And then, “No, I shouldn’t. It’s going to be out there forever.” And that was a failure of nerve.

So here is my argument that beauty is constructed. The green goop picture: 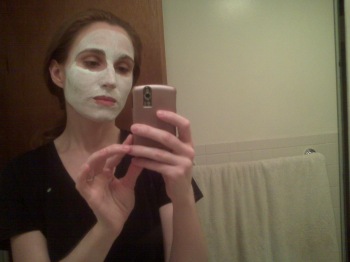 A picture with no green goop, posed and photoshopped:

And a drawing that Kendrick made of that picture. Here we circle back to the issue of art.

What bothers me is that I see beauty in nature as mathematical, while I see personal beauty as always constructed, always only an illusion. Perhaps the way to reconcile these two views is as follows: beauty itself is mathematical, a fractal relationship. That applies to trees and faces, as well as to works of art. How we get to that relationship, that variety within unity: in terms of personal beauty as well as art, that is always a construct, an illusion. It is something we create, as Pollock created his paintings.

(Which makes me think, if I just dripped paint on my face . . . Well, perhaps that will be the next photograph!)

11 Responses to On Beauty