I have a novel coming out this summer. It’s called The Strange Case of the Alchemist’s Daughter, and it’s about Mary Jekyll, daughter of the infamous Dr. Jekyll, who discovers that her father belonged to a secret society of alchemists . . . a society whose members were creating girl monsters. As the novel progresses, she meets Diana Hyde, Beatrice Rappaccini, Catherine Moreau, and Justine Frankenstein, all created through strange experimentation. I’m not giving you any spoilers, by the way. All of this is right on the book jacket!

Since the book is coming out this summer, I’ve started to see some mentions of it online, on various blogs or websites. There was one in particular that made me smile: a blogger listed books she would never, ever read, and mine was on it. Why would she never read it? Because I was rewriting stories written by others, rather than creating stories that were uniquely my own. You know what I would say to that blogger? You’re doing it exactly right. You know what you do and don’t want to read, and you’re not going to read books that don’t interest you. That’s exactly what readers should do. Read what you’re interested in — what makes you laugh, and cry, and happy to be alive. That’s what really matters. That’s what I would tell her.

But I do want to say something, to anyone else who might be interested in this book, about why I’ve written it — why, specifically, I’ve written a book about girl monsters, or in some cases monstrous young women (they range in age from fourteen to twenty-one). Let me tell you their stories, as they originally appeared:

Mary Jekyll: Of course, Mary does not appear in The Strange Case of Dr. Jekyll and Mr. Hyde. I made her up entirely. But I made her up for a reason. Stevenson’s book has almost no women in it — a couple of maids, a little girl who is trampled, that’s about all. This semester, I’m teaching a course called The Modern Monster, and we’ve talked about why there is a dearth of female characters in the novella. (If you’ve seen the stage or musical versions, you’ll know they both add female characters — predictably, a fiancée and a prostitute.) My hypothesis is that the book is specifically about late Victorian masculinity. Several times, Hyde is presented as symbolically female: he is in part, although not entirely, the female traits inside Jekyll that have to be suppressed for Jekyll to be a proper Victorian man.

Diana Hyde: Diana is entirely made up as well, and for the same reason. Mary and Diana both come out of what is not there, what does not appear, in The Strange Case of Dr. Jekyll and Mr. Hyde. I’m adding women where there were none — and not a fiancée and prostitute!

Justine Frankenstein: There is no Bride of Frankenstein, not in the novel. Frankenstein never creates a female monster because he’s afraid she would mate with his male monster and their offspring would outcompete humanity. He gathers body parts to create her, starts the process of making a second monster, then disassembles her and throws her body parts into the sea.

Catherine Moreau: Dr. Moreau does create a female monster in The Island of Dr. Moreau. He makes a woman by vivisecting a puma. Guess how many speaking lines she gets? Zero. She does exactly one thing: she kills Moreau. And then she, herself, is killed. Are you starting to see a pattern?

Beatrice Rappaccini: Beatrice is made, and she does get to speak! And then she dies. You can read all about it in Nathaniel Hawthorne’s “Rappaccini’s Daughter.” By the way, calling my novel The Strange Case of the Alchemist’s Daughter incorporates two references: to Stevenson’s novel, of course, but also to all the “X’s Daughter” novels. So you see, the references are deliberate, and they’re meant to be at least partly ironic. Although in this case, it really does matter whose daughter Mary is, and the whole issue of being a daughter, what it means to be a daughter, who is a daughter . . . well, the novel should raise some questions about that. But the thing is, all the characters I’m writing about, either they don’t exist or they die. Because that’s what female monsters do, in late nineteenth-century fiction.

That’s why I wrote this book, and that’s why it’s structured the way it is. Some readers aren’t going to like that structure — I already know that. It makes the book a little harder to read, because the central narrative is continually being interrupted. But what is it being interrupted by? Women’s voices. This is a book that, if I’ve done my job right, or at least accomplished what I meant to do, is filled with women’s voices, telling their own stories.

That’s why I rewrote the stories. Because they had no, or little, place in them for female characters. So I decided the stories were wrong, had been told incorrectly. I decided the women had their own stories to tell, their own perspectives. And I wanted to let them speak.

I don’t know how people will respond to what I’ve done — the book is totally out of my hands now. For months, I’ve been working on the sequel, which will take Mary, Diana, Beatrice, Catherine, and Justine deep into the Austro-Hungarian Empire. It’s so much fun to write about late nineteenth-century Vienna and Budapest! Although you have to know pesky things like how to get a passport, the timetables for various trains on the European continent, the exchange rate from pounds to francs to krone — all in the late 1800s! I can’t tell you what the sequel will be called yet, because we haven’t made a final decision about the title, but in my mind I think of it as Monsters Abroad. (No, it definitely won’t be called that.)

So why am I rewriting stories? Because the original versions killed and/or silenced women. I think stories need to be rewritten, just as social institutions like the university, the church, and the workplace need to be reconfigured, to include women and their voices. I listened to the original stories — I read them, I taught them, for goodness’ sake I wrote a whole doctoral dissertation on them. And I heard voices that were not on the page. So I told the stories those voices were telling me . . .

I think that’s pretty such always the way writing happens, whether the voices come from other works of fiction, history, the writer’s own family . . . You hear voices, and then you write down what they’re saying. 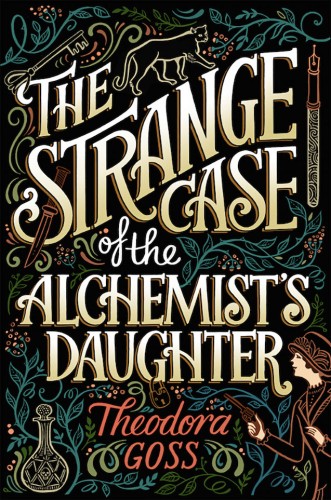 (Here is the book cover! Isn’t it beautiful? I can say that because I had nothing to do with its beauty . . . All the credit goes to the artist, Kate Forrester, and the art director, Krista Vossen.)