One of the hardest things about being a writer is that you can only tell your own stories.

I don’t mean that you can only write about yourself, or only about people like you. Of course you can write about different people, different places, different cultures. But the stories have to come from inside you. What you find outside needs to correlate to what you have inside. One of my central stories, for example, is losing a country. Or a family. It’s a story I find myself telling over and over again, almost as though I’m still trying to understand it. I could tell that story in a number of different ways, but the important thing is that it comes from inside and it wants to be written.

I’ve tried, before, to write the way I thought I should write. It never worked — the writing came out stiff, artificial. I see my students do it sometimes. They tell themselves, I’m writing a YA novel and this is the rule for writing a YA novel. They follow the rule, and the writing comes out sounding almost as though it were written by rote. It’s not alive . . .

“You can only tell your own stories” sounds almost inspirational, as though impelling you to tell your stories — it sounds as though it’s saying “you must tell your stories because no one else can tell them.” Which may be true, but it’s a different sentiment. “You can only tell your own stories” is actually a warning and a lament. Why a lament? Because what if your stories are not the ones culturally valued at that particular moment? What if you write poetry like Emily Dickinson or horror like H.P. Lovecraft? It’s going to be a hundred years before you are lauded as the most important poet of your generation, or people crochet Cthulhu hats. What if the stories in you aren’t New Yorker stories, or the sorts of stories that get you teaching positions in creative writing programs? I’m not talking about bad writing. I’m taking about good writing that isn’t what the culture wants or recognizes as innovative at a particular time. Or maybe ever . . .

I’m not sure, here, to what extent I’m talking about my own writing. After all, I’m writing in a genre that’s slowly being recognized as culturally important. I have many opportunities to publish my work. But even I feel, sometimes, as though my work is out of step, as though I am out of step with a mainstream. Or even, sometimes, where my own genre is going. But all I can do is write out of myself, dig deeper into myself, plumb my own depths to find the stories living down there. They are down in the mines of the self . . . And then find the things outside myself that correlate with those stories.

I was thinking, earlier today, of what is mine, what I know to be mine. What has become a part of myself. And I made a list:

1. Lists. Linear thinking, understanding through categorization. I learned it in law school, but it was always in myself. I have a logical mind that wants the world to be orderly. (Hint: it often isn’t.) I love order and structure and the intellect. I love the precision of a ballet class.

3. But also wilderness: the beauty of mountains, rushing streams, storms. Mountain slopes covered with forests, like the ones where I grew up. Their blue, one behind the other as though a giant had filed them, fading into the distance.

4. Europe, especially Eastern Europe, which calls itself Central Europe. And Hungary, my own little corner of Europe. Even though I lost it, it’s still mine. I still claim it, and I hope it somehow claims me.

5. The perspective of the immigrant, the emigrant. The one who wonders where she belongs, who thinks in two languages. Who is perpetually an outsider, belonging to both cultures but never entirely to either. Who feels perpetually inadequate, not enough in either place.

6. Fairy tales, especially the dark Eastern European ones I read as a child.

7. Poetry, especially poetry that sings, as it has sung all my life through my head.

8. The nineteenth century, because I studied it as a graduate student. I am professionally trained it in, and have in a sense made it my own. And there is something temperamental that calls me back to the literature and art of that era. The end of the century, which I know best, was a time of transition, of becoming. And I seem to have always been in that process. No wonder I like vases with dragonflies on them . . .

10. Handicrafts: sewing, knitting, lacemaking. And art, which does not seem so different, I suppose because my grandmother did all these things and they were all expressions of herself, her own creativity. I have always assumed that women make art, because in my family they all do.

So I guess that gives me immigrant monsters who sew and grow rose gardens, somewhere in the forest at the foot of the mountains? And make lists . . . Or maybe the story is in the form of a list? Which, yeah, is actually the sort of thing I write! I’m pretty sure it will never make it into the New Yorker. I think there is an 11:

11. Sincerity, belief in a deeper meaning, a deeper pattern. A pretty complete absence of sarcasm and snark, although I’m all right at irony, I think. A lack of interest in things that are contemporary simply for their own sakes, in brands for example, in things that are culturally “cool” but I feel are pretentious. A belief in the importance of beauty. For its own sake, and for ours. And also,

12. A horror of violence, so that I will never write a story in which random people randomly die, and it doesn’t matter, or it’s done to make a point. Every single character matters, to herself if no one else.

So that’s a bunch of it, at least: the bundle of things that make up what I write, where it comes from. I guess I can only keep discovering my stories by writing them. But they will come from me, from the woman who loves roses and monsters and lace, and hates violence. And if at some point the culture decides they are worthwhile, that will have nothing to do with me. I will have written what is in me, which is really all I can do, and all I aim for.

This is me (the me that all the stories come out of): 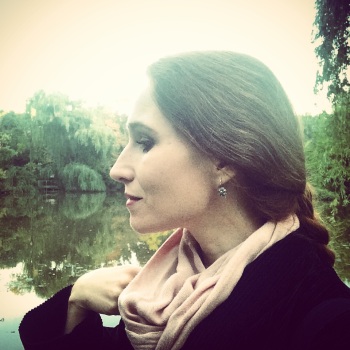 6 Responses to Writing Your Stories