Shoes of Bark
by Theodora Goss

What would you think
if I told you that I was beautiful?
That I walked through the orchards in a white cotton dress,
wearing shoes of bark.

In early morning, when mist lingered over the grass,
and the apples, red and gold, were furred with dew,
I picked one, biting into its crisp, moist flesh,
then spread my arms and looked up at the clouds,
floating high above, and the clouds looked back at me.
By the edge of a pasture I opened milkweed pods,
watching the white fluff float away on the wind.

I held up my dress and danced among the chickory
under the horses’ mild, incurious gaze
and followed the stream along its meandering ways.

What would you think
if I told you that I was magical?
That I had russet hair down to the backs of my knees
and the birds stole it for their nests
because it was stronger than horsehair and softer than down.
That when the storm winds roiled,
I could still them with a word.

That when I called, the gray geese would call back
come with us, sister, and I considered rising
on my own wings and following them south.

But if not me, who would make the winter come?
Who would breathe on the windows, creating landscapes of frost,
and hang icicles from the gutters?

What would you think, daughter, if I told you
that in a dress of white wool and deerhide boots
I danced the winter in? And that in spring,
dressed in white cotton lawn, wearing birchbark shoes,
I wandered among the deer and marked their fawns
with my fingertips? That I slept among the ferns?

Would you say, she is old, her mind is wandering?
Or would you say, I am beautiful, I am magical,
and go yourself to dance the seasons in?

(Look in my closet. You will find my shoes of bark.) 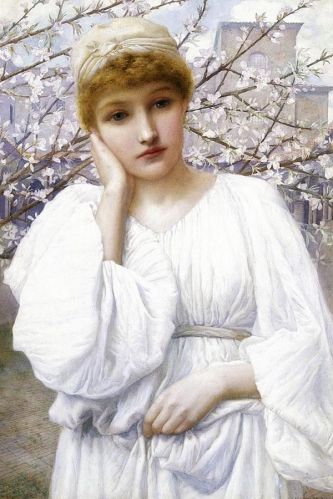 The painting is La Primavera by Henry Ryland. This is another of the poems I read at Mythcon.

2 Responses to Shoes of Bark